Description of the Piece

Inside a 1m² plexiglass box there is two fans blowing pieces of paper. This pieces have been punktured from books telling about winter that are spread around the box on the floor. The papers twirl around inside the box like confetti or like snow blown by wind. 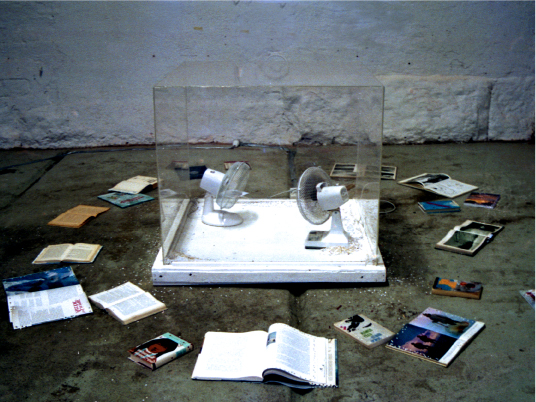 The winter of 2003-2004 I spend in Portugal Evora. In that time I had few encounters with a young man named Lenin that came from Cap Verde. He told about his father, the food of his native country and a lot of things about an alien way of life that was pretty hard to figure out for me. One thing Lenin was intrugued about was snow that he had never seen in real life. In Lenins mind snow was something sparckling, clean and light. Somewhere in his mind there was a strong assosiation between snow and Northern European democracies. In countries with snow he thought you wouldn’t be have your throught slit for land dealings. Snow was something clean. I tryed to tell him how cold and lifeless snow is. I tryed to tell him of our history and how they are taking down the social security of the country bit by bit now as something old fashioned. Lenin was quite insistant in his admiration and in the end made me think of the feeling of first snow in the autumn and how the spring snow blanket sparckles in the sun in rainbow colours. In the end I gave in to the seduction of snow and we shared it as a symbol of a society that was for me the nostalgic echo of 80’s and for Lenin hope for his country.

The nostalgia of this piece also refers to the ecological issues of our times. Our globe is warming up and the snow is retreating closer and closer to the poles. We do not know this is going to effect the whole wheather pattern and there are so many threatening factors that it is hard to calculate it all. The methane ice on the bottom of the ocean and the stopping of the ventilation currents such as Golf currents are huge wild cards. We Finns have experienced winter as a cold killer that comes year after year and for centuries it has been a grim reaper. Now we have started to see it in a different light as a protector. As long as the winter and ground frost with it comes we know that there is some kind of ecological balance is still there. We have started thinking warmly of our winters.